But first, start your Mike McCready pedalboard shopping right with these campaign codes:

During the release of their 2002 Album Riot Act, Sony music posted on their website the full details on the gear the boys in Pearl Jam used to create the album. Also posted was their stage set-up as of 1998 (which coincides with their return to steady touring following the release of Yield). These pedals have been building up since at least the recording of Ten and reached their peak during Binaural, after which a much more different Mike McCready pedalboard configuration could be seen.

According to the chart provided (see image), here is what composes Mike McCready’s Pedalboard (alternatives included for discontinued pedals):

As Riot Act is a change of direction for Pearl Jam, it accompanied a change in the Mike McCready pedalboard configuration. New effects enter and old ones leaves, making it distinct from what was being accumulate since the beginning of his time with Pearl Jam.

This is the board from the PJ20 Tour. 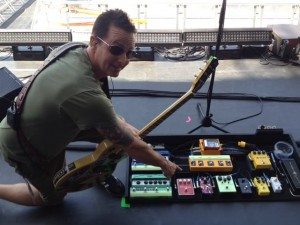 As Pearl Jam continue touring in support of their 20th anniversary, Mike updated his board.