A new Strokes album has now become an event, and the latest, “Comedown Machine”, is a great example why; there are good number of years since the last one, there are enough changes in their sound to make each one interesting and they still maintain their profile of the coolest band around. They’ve inspired a new generation of guitarist looking for both a dirty garage band sound and a very modern, yet hip, dance club elements. If one band defined the sound of the new millenium, it’s the Strokes.

While Julian Casablancas might get the most name recognition, much of the sound relies on Nick Valensi. Nick is the Strokes’ lead guitarist, and so if you are looking to sound like them, look to his feet to find the effects you need. There is little information out there concerning the evolution of Nick Valensi’s pedalboard. While there are some notes on pedal sightings, there isn’t a resource out there that has a pedalboard photo for each era or album.

We’ve scoured the web to compile the most complete listing of pedal and gear information for this artist on one page.

Boost and distortion are the most important stompboxes on Nick Valensi’s pedalboard. Like his colleague, Albert Hammond Jr, Nick will occasionally double up on a certain pedal to able to use different settings of the same pedal (in his case, with the MXR Micro Amp).

Of the few various accounts of his pedalboard through the years, there have been many constants within a small number of pedals (he rarely had more than could fit on a
Pedaltrain 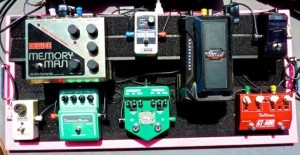 This is the most up to date information we have found regarding his pedalboard. It is also the most accurate, as it is the only available and clear photo of his pedaldboard. It dates back to at least a few years.

Visual Sound’s Double Trouble gives Nick the big crunch he needs in his sound, though the Fullton GT-500 and MXR Micro Amp all play important roles to leverage the distortion within his amps as well.

Nick Valensi Pedalboard – Other and Past Pedals

These pedals have had various sightings, though we have yet to find any images to confirm their use.